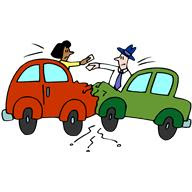 Come on, admit it. You slow down at the scene of an accident. You can’t help yourself. You want to know what happened.

When there’s a hurricane or an 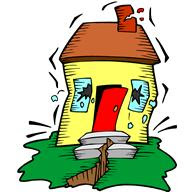 earthquake or a bomb blast, you stay glued to the television. You can’t help yourself. You want to know what happened.

When you see a friend upset or crying, you want to know what happened. It’s human nature.

So what does this have to do with writing scenes and sequels? Disaster is the third building block of scenes. The first two, goal and conflict, are set-ups for the third, disaster.

Disasters can be huge or they can be small. In my book, Don’t Bug Me! (Holiday House 2001), Megan has to collect 25 different bugs, mount them on cork board, and label them for her science project. When she goes into her room and sees that all her bugs are missing, that a big disaster for her. In another scene, Megan works hard at catching a cricket, only to lose it as it slips between her fingers. Her little brother scoops it up and claims it as his pet. Although not as big as losing all of her insects, this is still a disaster. Be careful, though, of making the disaster so big that you character cannot recover from it or so small that your reader either doesn’t notice or thinks it’s “much ado about nothing.”

· * Every scene has a disaster.

The disaster, big or small, must be the result of the conflict. It can’t come out of left field, unless you’ve set it up in previous scenes. It can’t be there just for “effect.” It must move the story forward.

· * Every story has a disaster.

The major disaster of the story comes at the climax and makes the reader wonder if the main character will achieve his goal after all. A story, though, will have at least three major disasters (one at the end of the “beginning,” one half-way through, and one at the end of the “middle”) before the climax. All of these disasters are related to the main character’s goal in some way and prevent him from achieving it, while moving the story forward.

· * Every character has disasters.

Your character will have lots of disasters, most of which are minor, but all hindering him in getting what he wants. Your character grows through these disasters; they strengthen him. He learns from the disasters. You decide which conflicts and disasters to give your character based on his fears, his weaknesses, his flaws. When you hit him with these, you knock him down. But you never want to knock him down so hard that he doesn’t recover. It’s okay if it takes him a few minutes to get back up, but your character must get back up; otherwise, your story is over.

Conflict creates tension. Disaster elevates it. So use human nature and our curiosity and concerns about disasters – whether man-made or natural – to keep your reader on the edge of her seat.

You can contact me at pam@anauthorworld.com if you need help with your story.